Reprinted from LymeTimeWithPaulaJacksonJones.blogspot.com with the kind permission of Paula Jackson Jones. To read the original article, click here.

“Strength through adversity. The strongest steel is forged by the fires of hell. It is pounded and struck repeatedly before it’s plunged back into the molten fire. The fire gives it power and flexibility, and the blows give it strength. Those two things make the metal pliable and able to withstand every battle it’s called upon to fight.” [Author Sherrilyn Keynon]

It is often stated that some things can only be learned in the storm, forged in the trials of fire. I’ve encountered hundreds of people whose lives were forever changed by the storms that they walked through. I am one of those whose life was forever changed.

I am empowered, not entitled, I survived my storm, and this is my message.

I was an active, outgoing, very happy woman before I got sick. I had just gotten remarried, had a wonderful job and life was good. Then I was bit by a tick one fall day while out cleaning up the yard with my husband.  The tick had not been on me that morning but was attached and partially engorged by 5pm when I came in to shower. We removed it, flushed it and thought no more of it. Until my symptoms began. These were unexplained symptoms that made no sense to me and what was more puzzling was the diagnosis I was being given. I was not anxious or depressed and yet, I was given treatment and categorized as such in my medical file. As my symptoms continued to grow, I was told that I was experiencing panic attacks. From there, “woman’s issues”, chronic fatigue and Fibromyalgia.

I brought up the tick bite, but the negative test results ruled that out.

Soon came the cognitive issues. Once sharp, with great attention to details, I was now forgetting things. Things that were second nature to me. I was not aware of this at the time and was only going to the doctor to try to control the growing physical pain that I was living with daily.

More medicines and more diagnosis that didn’t work and didn’t seem to fit. As my confusion and pain grew, I withdrew. I was unable to drive as I was getting lost more frequently in the very town that I grew up in.  Concentration took a lot of effort and energy, energy that I just didn’t have. Conversation were difficult as my thoughts were hard to express, and my words were often wrong. More visits, more tests, more meds and more diagnoses.  MS, Parkinsons…maybe ALS??

TWENTY-THREE. Twenty-three medical providers and specialists whom I entrusted my healthcare to failed me. Twenty-three who mocked me, who told me repeatedly that it was all in my head and who tried to convince me that my pain and cognitive issues were from depression. Twenty-three providers who repeatedly misdiagnosed and mistreated me. 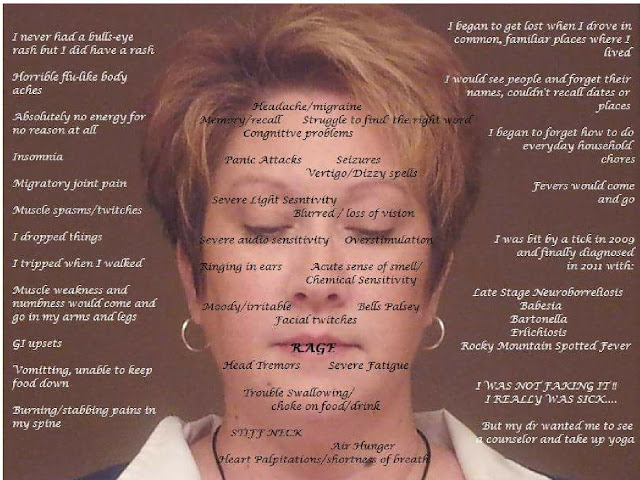 During this time, I had people supporting me, telling me that I needed to get re-tested, who were unwilling to accept that diagnoses I had been given. It was this support that fueled my efforts to step up and ask for additional testing ~ only to be reprimanded for “playing doctor” and threatened to be dismissed as a patient.

Then it happened. Twenty-Four. This doctor listened to me, validated me and my concerns and offered up additional testing which reveal my official diagnosis ~ late stage neurological Lyme Disease. Further testing with doctor Twenty-Five revealed co-infections ~ Babesia, Bartonella, Erlichiosis and Rocky Mtn Spotted Fever (all tick-borne diseases). Treatment began and was support by those two doctors until doctor Twenty-Six joined the team and helped bring me into full remission.

This is my message, one that I learned in the storm, one that I could only bring to you by firsthand experience. 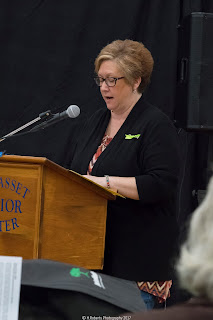 Not every doctor is knowledgeable about Lyme and tick-borne diseases and that can and will work against you and cause further harm.  If only the testing were more accurate and reliable. If only my medical provider had had more knowledge about these diseases, perhaps I would have had a more accurate diagnosis early and had been treated better, more effectively.  I would not have suffered and lost so much. Wasted so much time and spent so much money.

William Osler “the father of modern medicine” and co-founder of John Hopkins University was known to say, “Just listen to your patient, he is telling you the diagnosis.”

It was from my storm that my experiences grew into strength and strength grew into a message, a message which now defines me and one that I freely share with all whom I encounter. 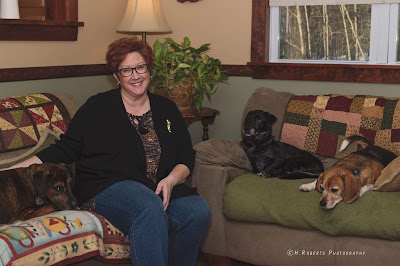 Paula is the President of the MLDSE, the Maine-partner of the national Lyme Disease Association, a member of Maine’s CDC Vector-borne Workgroup and active in Maine’s Lyme legislation. You can reach her at paula@mldse.org.